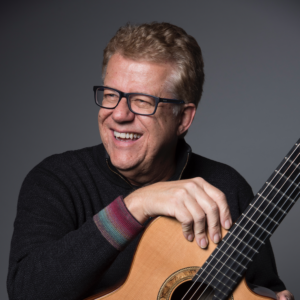 King of Bossa and Open Studio artist, Romero Lubambo discusses some essential tips for expanding your range on the guitar in this 2 Minute Jazz Video.

I would like to talk to you about playing the scale in the whole neck of the guitar. A lot of times we think about one position to play a scale. When I asked sometimes some student to play, “Oh can you play a C major scale?” which should be easy, they play –

or sometimes with two octaves.

But I think scales should be thought as the whole thing on the neck. So the C major scale should start here –

You have to have this vision that all the notes of C major scale, where they are. For example, if you are playing a solo, we have to know what’s here or here or here .

So one thing that I did and I do when I have some time, is to play
notes just randomly off of any scale. I’m talking about C major but it should be done for every scale.

So for example , I know those notes belong to C major scale and you should know because when you’re doing a solo, improvisation, we have to know which notes belong to the scale that you want to play.

Not necessarily on top of C major, maybe you play the scale, D minor chord for example. You still need to know – So practice this as weird as possible in terms of – The most weird you can do, the better because your brain is going to get used to those jumps, you know, and you get used to see those notes on the neck of the guitar, it’s gonna help you a lot. Do that for every scale. Thank you very much.

“Boa sorte com a música” – Good luck with the music!